I got as far as having the front end built, and most of the swingarm before I ran out of time for the 2014 DBC.
Pol got a look at the bike on a friends cellphone, and made it known that he wanted the bike in the event for 2015, so pressure was on.
Meanwhile, I was doing graphic design for the BAMS Show. The organizer had made the judgement error of making it too much of an HD-oriented show, and made a big effort to get other makes and non HD customs invited to the show. So Julian and I drug our junk to the show.
I had to fabricate the swoopy subframe to make it truly a rolling chassis, and this image is it's first public showing.
A bunch of the HD Doooodz said "cool hillclimber, bro."
Canon PowerShot G12, f/2.8 @ 6.1 mm, 1/30, ISO 400, No Flash
© Alan Lapp and Zina Deretsky 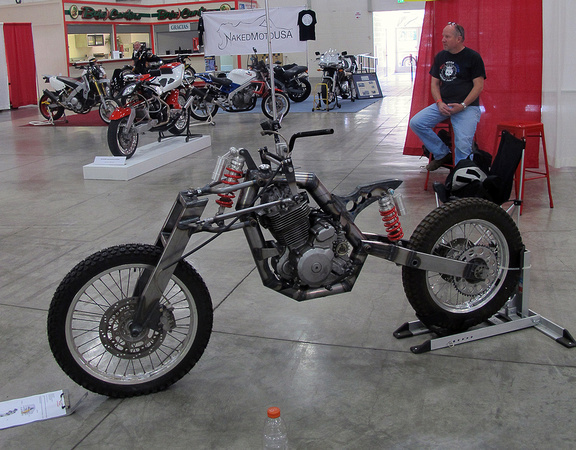