No mistakes, only opportunities

As soon as the final weld cooled on the main chassis tube and I tried to slip it over the engine, I realized I had a major problem. It wouldn't go, the interior space was too small for the engine.
Some head-scratching and troubleshooting and I figure out that I had originated the error in my photograph of the motor: the tape measure in the shot wasn't perfectly perpendicular to the axis of the camera, and was foreshortened by about 3%. I confirmed this by measuring the distance between two bolt heads.
So, I could either burn more time, and throw it away, or I could come up with a solution. Notching the frame was what I chose.
A friend saw the bike with the motor (finally) sitting in the chassis, and he commented that it looked like the motor had melted it's way into the chassis.
Canon EOS 5D Mark II, f/4 @ 47 mm, 1/25, ISO 800, No Flash
c 2014 Robert Stokstad 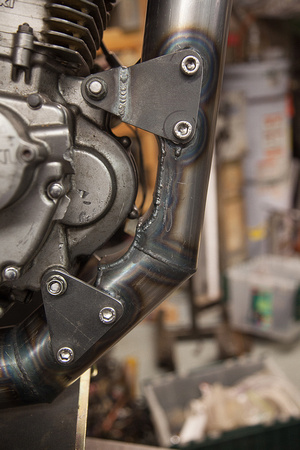